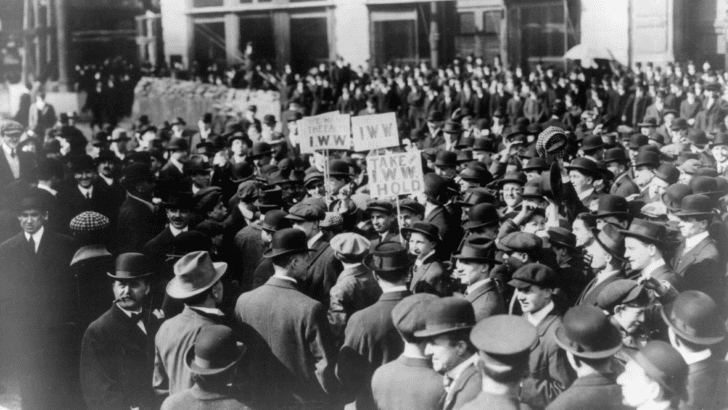 In a month featuring a couple of significant labor actions in the Boston area—the Harvard University dining hall workers strike for better pay and benefits, and the Boston Carmen’s Union’s recent civil disobedience action against privatization at the MBTA—it’s worth reflecting on the difference between unionized workers and other workers in the US. Which can be summarized as follows: Union workers fight.

One can criticize them for not fighting hard or effectively enough, and I certainly do from time to time, but when push comes to shove union workers will push back. Collectively. Putting them in a stronger position than the rest of working people in this era. Nearly 90 percent of whom have no representation on the job. Tens of millions of workers who are unprotected “employees at will” that can basically be fired at any time for any reason other than open discrimination. And chances are, you’re one of them.

Yet the reaction by many ununionized workers to their unionized fellows can be puzzling. Egged on by conservative ideologues, the common refrain on social media and in bar rooms from coast to coast is that union workers are “greedy” for wanting more than their bosses give them. Even as billionaires control ever more vast sums year by year. And deploy that wealth to influence politics to make themselves richer by the day.

This leaves union critics caught in a rather obvious contradiction. On the one hand, under capitalism we’re all supposed to applaud people who get rich for constantly demanding more, more, and still more. For themselves alone.

But when union workers demand more as a group, that’s somehow bad. Resulting in the spectacle of anti-union working people arguing that fellow working people in unions need to start acceding to less. Advancing the ludicrous claim that there’s not enough money and stuff to go around in our tremendously wealthy society for anyone but the rich.

Conservative critics—some working people among them—actually think it’s better for such union workers to disband their unions and be satisfied with whatever their bosses feel like giving them. Or, as they typically put it, to accept what “the market” will bear. To join ununionized workers in the war of all against all. Racing each other to the bottom of the economic pyramid, until a new feudalism grips humanity. Where “the multitude,” as Antonio Negri and Michael Hardt put it, are dominated completely by “the one percent” named so accurately by the Occupy movement.

To prevent such a dystopia from ever coming to pass, it’s time for ununionized, and therefore unorganized, workers to draw a proverbial line in the sand at every workplace in America—including right here in Boston.

In place of the culture of fear that reigns at most every job—the fear of being fired for promulgating even the slightest appeal for justice—there must be a culture of democratic resistance. Workers must start organizing together wherever they are to demand more. More money, better benefits, better working conditions. And critically, more control over their workplaces.

This organizing can involve joining traditional unions where possible, but that is not a necessary precondition to starting to fight back. It can begin as simply as holding meetings after work, discussing problems with the way things are going day-to-day, looking into how workers in similar situations have dealt with their problems on the job, and deciding how to fight for redress.

Some will say that such conflict is old-fashioned and counterproductive, and that it’s far better to work together with owners and bosses to come to some kind of accord on the job. From a position of permanent weakness. Leaving power in the hands of the monied elites. In your workplace and in the larger political realm. I would counter by quoting the preamble to the constitution of the storied democratic union of the turn of the 20th Century, the Industrial Workers of the World (IWW), “The working class and the employing class have nothing in common. There can be no peace so long as hunger and want are found among millions of the working people and the few, who make up the employing class, have all the good things of life.”

As the horrendous presidential race approaches its climax, it’s important to keep this in mind. If you’re wondering why both major party candidates are terrible, and why neither of them are standing up for the interests of working people—for your interests—the old language of radical democracy, plainly expressed by the IWW preamble, provides the beginnings of an answer. The rest of that answer—at your job and in world that surrounds it—is up to you. And all of us in the multitude.